Just before Christmas, I needed to pick up some last minute items in the shops so it was a perfect test for the cargo bike to see what I could bring along & get used to in terms of handling the children & doing some shopping.

Blackrock, is a village on the south side of Dublin city. There is quite a bit going on commercially in the village centre itself with a wide array of businesses including two sizeable shopping centres also.

Kudos needs to go to Dun Laoghaire Rathdown (DLR) County Council from a cyclist’s perspective when it comes to Blackrock. We are coming from the Deansgrange area & as you approach the Blackrock village area, the Frascati Road turns from a single carriageway to a very busy dual carriageway. In the past year or so, DLR County Council upgraded the Frascati Road dual carriageway with decent enough cycle lanes which were badly needed as this road is very busy at the best of times. The end result is that the lanes are of good surface quality & wide enough for a cargo bike.

Another bonus in relation to Blackrock village itself is that there are plenty of places to lock your bicycle throughout the village. There is a large enough bicycle parking area which has room for larger bicycles such as our cargo bike: 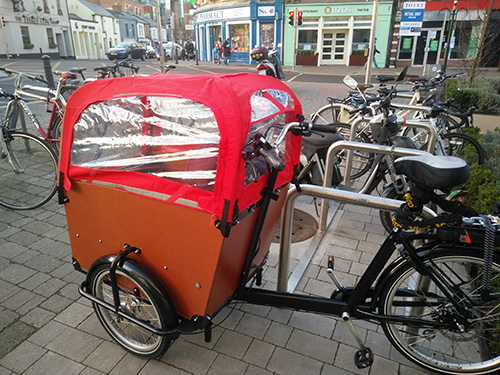 With me on this shopping trip were two of the kids. The youngest is 1 & is not walking yet so I brought along his buggy which is quite compact. As you will see from the photographs below, with the Babboe Big we can easily fold away the front seat so that we can add bulky items in beside the passengers. Thankfully it was not too squashed for the little ones when they were sitting beside the the buggy & shopping.

This particular trip was great to test what it was like to take the children out on the bicycle as well as taking along the buggy. The journey was relatively short but it was a relief that the dual carriageway beside Blackrock village had decent enough cycle lanes. While not perfect in terms of infrastructure, it felt safe enough to navigate. It is a bit tricky if you want to turn right into Blackrock village so I used the aid of the pedestrian lights at the Frascati Shopping Centre to get over to the right turning lane across 2 lanes of traffic. The cargo bike is not really great for darting across two lanes of traffic so unless the traffic is light, then I air on the side of caution when it comes to the cargo bike with children on board.